We, LeaLea International Limited, distribute “LeaLea – the 100% natural cream for wart, mole and birthmark removal” in Europe through online retailers.

The inventor Rolando C. Dela Cruz is an award-winning Philippino scientist and inventor. In 2000, he developed a patented formula that allows the removal of deep growth moles or warts. His formula was extracted from the Phillipino cashew tree (Annacardium occidentale), which is common in the Philippines and is known as “kasoy”.

In the Philippines, the treatments are performed directly in shopping malls. The product has already been tested for more than 10 years and has been successfully used millions of times.

Dela Cruz’s formula of has won numerous awards, including a gold medal at the International Fair of Innovation, Industrial Design and Technology in Kuala Lumpur in September 2000.
Dela Cruz was also the recipient of the “Tuklas Award”, for the most outstanding invention in 1998, from the Department of Science and Technology. 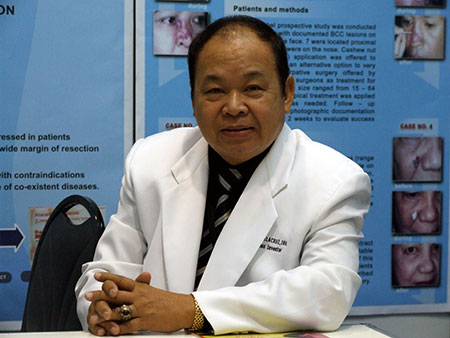 Dela Cruz’s patented formula received two more international gold medals, one from the Archimedes Inventors’ Fair in Moscow (Russia) in March 2005 and the second from the iENA, International Inventors Forum in Nuremberg (Germany) in November 2005. The same invention also received the highest score from a panel of international judges and was the top winner in the “World Invention” category for 2006 at the British Invention Show on October 21, 2006 in London.

“We are the only manufacturer in the Philippines to use the cashew oil creams for the removal of warts, liver spots, skin tags, xanthelasms, millia, syringomen and other skin diseases. The award-winning cream has been produced under the strictest and highest standards to ensure cleanliness, efficiency and safety for our customers. Thus, we won the support of the Philippine Government through the Ministry of Science and Technology (DOST). Our invention even became one of the official representatives of the Philippine Government in international exhibitions and exhibits for inventions and innovations.

Furthermore, the innovative cream has won numerous coveted awards in the Philippines and other countries such as USA, Russia, Germany, United Kingdom, Switzerland, Japan and neighboring countries in Asia. The cream, with cashew oil as active ingredient, competed with other inventions from all over the world and nevertheless won numerous gold awards.